Photo of the Day - War Dog 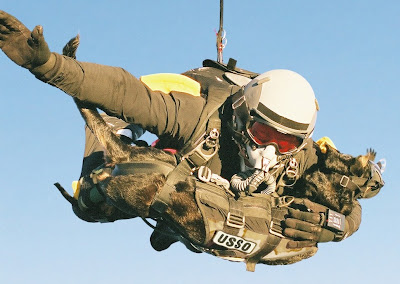 Dogs usually jump in tandem with their trainers, but when properly outfitted with flotation vests they can make short jumps into water on their own. A U.S. Navy SEAL, Mike Forsythe, and his dog, Cara -- pictured above -- recently broke the world record for "highest man/dog parachute deployment" by jumping from 30,100 feet.

Dogs have been fighting alongside U.S. soldiers for more than 100 years, seeing combat in the Civil War and World War I. But their service was informal; only in 1942 were canines officially inducted into the U.S. Army. Today, they're a central part of U.S. efforts in Iraq and Afghanistan -- as of early 2010 the U.S. Army had 2,800 active-duty dogs deployed (the largest canine contingent in the world). And these numbers will continue to grow as these dogs become an ever-more-vital military asset.

So it should come as no surprise that among the 79 commandos involved in Operation Neptune Spear that resulted in Osama bin Laden's killing, there was one dog -- the elite of the four-legged variety. And though the dog in question remains an enigma -- another mysterious detail of the still-unfolding narrative of that historic mission -- there should be little reason to speculate about why there was a dog involved: Man's best friend is a pretty fearsome warrior.